This one is most certainly interesting. Whether you like it or not, hopefully you can watch this and say, “I’ve never seen any other wedding trailer edited like that before.”

Jason + Dina had such a unique and aesthetically beautiful wedding that we wanted to take a unique, albeit abstract approach to their trailer. The inspiration for the stop-motion like feel is two-fold centered around the belly dancing (which was a very large part of their day, thus an important part of their film) and the song choice for this edit. We always like to show the viewer the day in a way they never thought was possible, so we are proud to say this edit keeps within that thought process that ultimately, drives us to do better work each and every time.

We are constantly asked where we find our music choices and while the answer is a well guarded secret, there are just some songs that are no brainers, even if many have heard them before. Florence and the Machine is already very well known (and rightfully so). Fortunately, this song has not hit mainstream yet, but it most likely will very soon. At least we can say it was here before it was on the radio, lol.

In any case, we encourage you to check this one out a few times as the first time you watch, it may be sensory overload, but pay close attention as even though the edit in and of itself is unique, there is still a story to be told. . . . Jason + Dina’s story. Truly a passionate couple whose energy and enthusiasm was reflected throughout the evening, most noticeably in the incredible dance sets that took place throughout the night.

DISCLAIMER: First time we’ve ever had to do this to a trailer. If you have ANY adverse reactions to stop motion or constantly jittery footage, DO NOT WATCH THIS TRAILER. The rest of you. . . . Enjoy! 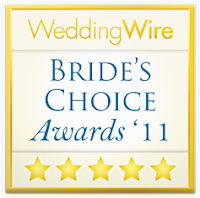 We just got the news that Weddings by SML has received the WeddingWire Bride’s Choice Award in 2011 now setting three consecutive years that we have received the distinction!

What this means is that Weddings by SML stands among the top five percent of wedding professionals in the WeddingWire community, representing quality and service excellence within the wedding industry. Awards were given to the top wedding professionals across 20 service categories, from wedding venues to wedding photographers, and were based on the overall professional achievements throughout the past year.

Truthfully, the reason we get these awards is because of our couples and the fantastic reviews they have left us over the past few years. Thank you so very much to all who contributed and we are truly looking forward to some big things in 2011 🙂

While January is usually a time for winter sports, snow storms, and hot cocoa, here in beautiful Southern California, we keep rockin’ the weddings! Tony + Chrystal invited us to be a part of their day as laughs and vows were shared along with an unusual invitation for the groomsmen. . . . .

The girls got ready at the salon and as Tony made the final touches, his parents gave him a traditional Chinese blessing as they placed his jacket upon him to send him off.

Special thanks to John from VIP Events for his help at the reception and also a shout out to Kristy Walker from Studio Verite. Kristy is a great photographer and so fun to work with as well! Filmed on location at the Grand Tradition in Fallbrook.

No snow at this wedding, just a ton of fun and a wonderful couple! Here is the Same Day Edit we showed at their reception on Saturday night.


P.S. – Did somebody say photobooth??? Of course we couldn’t resist. Our favorite is the Bottom left. 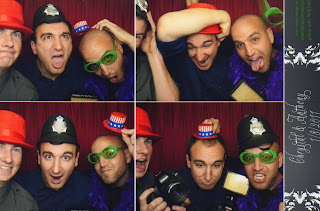 The destination wedding is always an option that we welcome and for a number of reasons. Not only did Ted + Lisa allow us the opportunity to share their story in a unique and distant setting, but it also allowed us the opportunity to show why this setting was chosen and special to the two of them. Set in the sleepy town of Morro Bay, this wedding had a small town vibe with a gracious and intimate group of family and friends. This highlight includes footage filmed over multiple days on their wedding weekend

As we welcome in 2011, we start January off with a Bang, lol, literally. And the jokes are not going to get any better, so please don’t hold your breath. Let’s just say this shoot was so much fun to be a part of and we couldn’t wait to pull the trigger on this one. . . . ok I’m done now.

It seems as though every year, our couples look to outdo one another as it pertains to their activities for the morning of the wedding day. Golf outings with father and son. . . . .5K runs and Yoga on the Beach. . . . so when Ted + Lisa showed us their list and it said “Guys to go Trap Shooting”, we were sold. ha! Not to mention the pun of the phrase (Ted’s last name is Trapp) was too knee-slapping funny to ignore.

We don’t get the opportunity to follow a storyline like this at every wedding, but Ted + Lisa’s day wasn’t like every wedding either. Filmed on location up north in the sleepy seaside town of Morro Bay, let’s just say that we stuck out like sore thumbs. As we went to grab some footage of the small town shops, locals were curious to say the least, but when we informed them that we were there for the “Trapp Wedding”, they looked at us with a face that said, “Oh, the Trapp Wedding! Why didn’t you just say so in the first place???”

Anyways, back to the storyline. . . . .Ted + Lisa are anything but ordinary and their sense of humor proves that point. While they don’t take anything in life too seriously, they did have a plan for their day. Lisa mentioned at one point in the reception that “It takes a village”, referencing what went into the planning of the wedding. That had more meaning than either of us realized because as we began to edit, we saw that theme over and over again in the footage, even culminating in the final shots of this trailer where family members came together at the rehearsal to put the decorating touches on the small church Ted + Lisa were to be married in. Grandma dropped flower petals on the runner that Ted had been on his hands and knees to tape down. Aunts and Uncles, Cousins, and friends, all rushed last minute to put the final touches on the church so it would be ready to go the next afternoon for the ceremony.

From sunrise to sundown over the 3 days we shared with Ted + Lisa, everyone surrounded the lucky couple and their sense of humor and willingness to laugh at each other and themselves even showed its face during the vows. While Lisa feels this word can be cheapened by its overuse, there truly is one word that describes the wedding weekend that was Ted + Lisa. . . . . amazing.

A special thank you to Paul Thompson from Escape Entertainment. Also, a special recommendation for anyone looking for a gem of a find in Morro Bay. If you want to treat yourself to a fantastic dinner on the water, goto Windows on the Water, where Ted + Lisa’s reception was held.