The key to every couple is their story. The story always defines who and what we are and even more importantly, what we are all about. Every time we meet with a couple, we look for the things that make them unique, interesting, and separate them from others.

Sure, everyone is going to share some vows or the exchange of a kiss at the end of a ceremony, but we want to know what it is it that makes a couple unique. What separates them from all others and helps to tell their story? In Pia + Ryan’s case, it’s simply sneakers & shoes.

You see, when we first met this wonderful couple, the first thing that stood out were the sneakers Ryan was wearing, and after a simple comment about the kicks, Ryan revealed that (at the time) he owned over 300 pairs of sneakers. . . . . not a typo. . . . . over 300 pairs. Then Pia revealed that her love for shoes was not to be sold short as she also owned shoes into the triple digit count. Let’s just say that they have some serious shoe equity 🙂

Well, from that point on, it was a given that the guys (and girls) would be rockin’ some special footwear the day of and we were determined to tie it into their story. So you will see a fun little sequence in this trailer that takes place before the grand entrance as the guys needed to go to their car to grab their custom kicks. We searched everywhere and couldn’t find one of the groomsmen, and then, at the last minute, he finally showed up. He was hanging out at the bar, who would have thought? So we inserted him last minute as you’ll see. Also, a shout out to the INSANE photo backdrop (not a photo-booth, this thing took up an entire room!) and the ever talented Gregorio Bumatay of Bumatay Studio for snapping stunning imagery the day of. Thanks also to to Majell Del Castillo of MDC Events for keeping the timeline on track!

Pia and Ryan, you’re style rocks and even better, the fact that you were willing to be yourselves on the day of your wedding makes us smile every time we see this trailer. Enjoy!

P.S. – All of our couples know that we are suckers for photobooths! Thank you again to Greg for shooting us these photos! 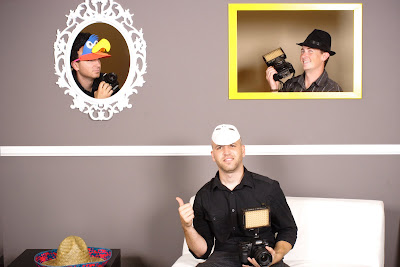 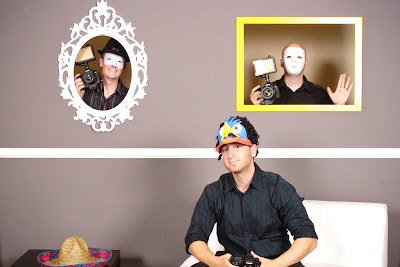 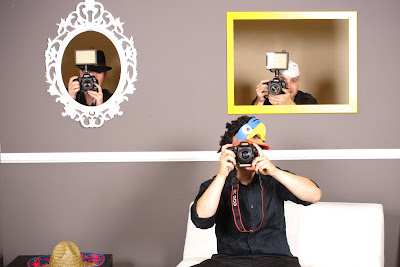 What a wedding. On so many levels was this day truly enjoyable. There is nothing more rewarding than when we can say that not only has a couple been one of our clients, but they have become our friends as well. Brianne + Bill are two of the nicest, most genuine and sincere individuals we have been able to work with and it was an honor to be a part of their day!

Brianne is a lifetime dancer as well as dance instructor for a local High School. In fact, we first met Brianne because she used us to film some dances for her classes at school. Bill is an attorney and now. . . dancer extraordinaire. . . well at least according to the video we made for them:-)

Wanting to take their reception to the next level, we thought it would be fun to build up to their first dance by showing a fun little “Dancing with the Stars” type short directly preceding the dance itself. This way all of the attention would be focused on their first dance, which Brianne had choreographed herself! All of the guests know Brianne is the dancer, so the play was for Bill to be teaching Brianne the dance steps for their first dance as Brianne clearly had no idea what she was doing.

Needless to say, the video was a hit, and of course we filmed some of the reactions, as well as their first dance so we could show all of it here!

To take it a step further, we went in the completely opposite direction for their same day edit with a wonderful interview narrated piece that truly revealed just how in love these two are with one another.

From a Spoof Video to a dramatic Same Day Edit. From Laughter to Tears. This one had it all, and here are three different clips for you to check out.

This is the spoof video that was created for their guests to see directly before they took the dance floor for their first dance:

This is the Same Day Edit that was shown later in the evening:

This is the spoof video with reactions cut into it AS WELL AS the actual first dance from the reception (NOTE: the reaction shots are dark because we didn’t want to distract the guests with lighting. So we simply filmed the reactions in the dark and bumped up the gain on our cameras. That is why you may see some pixelation in the reaction shots):

Also, I wanted to give a VERY LARGE THANK YOU to Peter Papadopoulos from Vive Entertainment for all of his help at the reception with the audio, setup, and testing of the video presentations for the evening. Truly an exceptional guy who does a great job moving the reception along! Also, special thanks to Kathleen Clark from KCP studios as well as the honorable Jeffrey L. Gunther who performed a fantastic ceremony service.

Over the July 4th weekend, I received a voicemail from a photographer by the name of Jasmine Star asking if I could collaborate on a video with her. As I first heard the voicemail, my hear skipped a beat. You see, Jasmine Star is a very well known photographer. How well known??. . .

Needless to say, flattered is not a word that does it justice when she contacted me to collaborate with her. and then my heart started beating again.

Jasmine is working with Chase Jarvis (HUGE COMMERCIAL PHOTOGRAPHER) and CreativeLive to host a free online seminar as she shoots a real wedding. . . LIVE. It’s a crazy idea and Jasmine is just the photographer to pull it off. What an honor to create a video for such a vibrant personality with an addictive laugh and great sense of humor.

Congrats Jasmine!!! – and here is the video we produced for her:

UPDATE TO THIS POST: The other video that we created for her is now live as well. This video is Calling all couples to apply to be married LIVE in front of a massive photography community and anyone else who is down to watch! Check it out:

Often times the bride and groom are asked to write their own vows to one another. Perhaps they recite what their beau reminds them of, or the thoughts that come to mind on their wedding day. We found Eric’s vows to Heather to stand out on a few fronts. First, he said he wasn’t going to make it through without crying, which was true, because he made it eleven words in before he got choked up.

All kidding aside, Eric decided to explain just how much he loves Heather in his vows, and we must say that he loves her. . . . . a lot.

A huge congratulations to the newlyweds and the best truly is yet to come. In the meantime, check out their wedding and his vows below!

>How to Tie a Bowtie // A Collaboration of Greatness

About a month ago, we made the decision to add a wonderful addition to the office space by bringing in two amazing photographer friends by the names of Gabriel Ryan and Carlie Renee. It’s always great to bounce ideas off other professionals in the industry, get feedback from a different perspective (photo vs. cinema), and have a great time working with others on a daily basis. What better way then to move them in???

We knew going into this that inevitably we would work on various future projects together down the road, but we never thought we would have such a great opportunity just a few weeks in!
So, two weeks ago was our first collaboration. . . . . 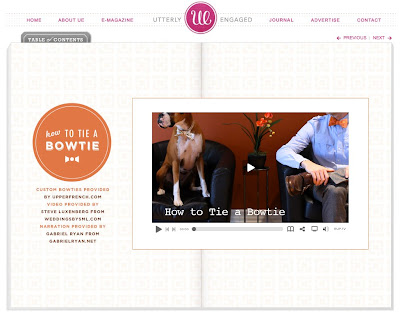 The chic ladies from Utterly Engaged (also the creators of a wonderful little gem of a find in Tustin called The Wedding Pantry) asked us to create a tutorial on how to tie a bowtie, which they wanted to feature in Issue 011 of their wonderful, unique, and first of its kind Wedding E-Magazine. Instantly we knew two things: 1.) It had to be funny and 2.) Bailey (the boxer) had to be in the tutorial. So after an hour of filming, 45 minutes of editing, and 9 bags of dog treats later, we came up with this, and we are pretty happy with the result, if we don’t say so ourselves. Maybe we are jaded because of the cute little dog in the bowtie. . . . . you be the judge.
Comments
Page 5 of 10« First«...34567...10...»Last »
FacebookTwitter