>I must say that this was the first time we filmed a father and daughter performing a remix dance to “Beat It”, and that was just the beginning. . . .

It was such an honor to be a part of Frank and Patricia’s big day. Tradition, respect, and love play such a huge role in both of their families and everyone was so easy to work with. How cool to see the parents from both sides greeting every guest that entered the room at the reception. Filmed on location at the Mission Inn, Riverside, a venue synonymous with beautiful weddings, this one didn’t disappoint.
And the fact that this Bride and Groom like to dance didn’t hurt either. . . . .
Here’s Frank + Patricia, the Trailer.
Enjoy
-Steve 🙂
P.S. – Special request from Patricia to show the entire “Beat It” portion of the dance with her father, so here it is. . . .
Comments
09/23/09

One of the most rewarding parts of our job is the ability to create something that is truly unique. Our couples know that we don’t do ordinary and I like to think that all of our couples are distinct in that they hire us because they are looking for something that is truly extraordinary. We go into each shoot with that in mind and when we receive thank you cards, I always like to share them because I feel that every time we receive one of these cards, it shows that the mission has been accomplished.

Just today, we received a pair of thank you cards, one from Sean + Sara, who we had the joy of filming in Palm Springs, and the other came from Ryan + Sara, who took the plunge at Padua Hills.

Congratulations to both couples and may we say “thank you” for the thank you!

Here are the cards they sent: 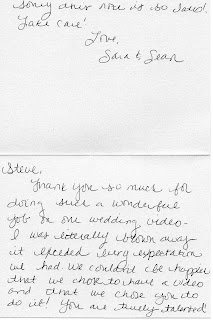 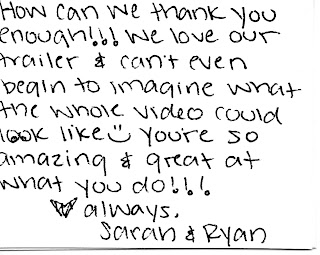 >When Jessica first contacted us, she was interested in having the first glance between her and Ryan take place at the Lab in Costa Mesa. Instantly, we were in.

I think these two had one of the most emotional and moving first glances I have ever had the privilege of filming and I think it is a testament to just how deeply in love with one another Ryan and Jessica are. We had a blast not only putting together a killer photo session with Janel Conlan from Focus Photography, Inc., but also simply partaking in such a great day with two very gracious and fun loving people.

Congratulations again to Ryan and Jessica and enjoy the trailer!

So this post has NOTHING to do with weddings. . . . . . . well, that’s not entirely true, you see, you’ll remember Cooper from two other clips that have made the blog. He was featured in a Save the Date video with his now wife Lauren, and we posted their trailer a short while ago as well!

Cooper is a drummer and that’s all he wants to be, forever. He even formed a company (Acoutin Custom) which fabricates custom drumsets. If you get into a conversation with him about drumming or making drums, he will happily tell you that drumming is what he wants to do, forever. It goes without saying that this is most certainly why he was put on this earth.

It also goes without saying that he is good, really, really good. . . and I was honored when he asked us to put together a drum solo video for him with the intention of building a reel/business card for the industry.

So we got together late on a Monday night and filmed into the wee hours of the morning until we arrived with enough tape for two songs. This is the remix he laid down for the Jay Z song, “Run This Town”. We also put together a killer video to an Eminem track, but for the sake of keeping this blog G rated, I haven’t posted it here (lyrics to the song will not be found on the Disney channel). If you would like to view the Eminem track, just email me and I’ll shoot you the link 🙂

Cooper Acoutin, you are a talented man, and all I can say is don’t forget about us little people when you become famous. . . . .

>Ryan + Sarah – Perfect With Many Imperfections

>When we first met up with Ryan and Sarah, it was evident that their day was going to be all about having a great time with family and friends, and they didn’t let us down. As the thermometer cracked 101 on a blistering Sunday afternoon, Ryan and Sarah were married at the stunning Padua Hills Theatre. If you are looking for a venue that offers nothing but Kodak moments everywhere, this is the place. Special thanks to David from David Torralva Photography for being so easy to work with, too!

Perhaps one of the best parts of the day was the newlyweds toasts to one another. Unfortunately, since this is a trailer, you won’t see most of what they said, but we simply had to include how Sarah summarized Ryan with such a simple phrase. (. . .the title of the post kind of gives it away. . . )
We pride ourselves on creating unique films that fit our clients. Ryan and Sarah made it very clear that they wanted their film to be upbeat, crazy, and all about the moment and just embracing the atmosphere of the day. So be warned, this edit is not for the sappy human, in fact, if you want to harness a box of tissues and some comfort food, may we suggest you scroll down a post or two to another clip.
This one is all about two things. . . . love and fun. . . . oh and maybe the glow sticks at the reception!
Enjoy!
Steve 🙂
Comments
Page 3 of 9«12345...»Last »
FacebookTwitter