With our eyes fighting to stay open, we crawled out of bed at 6am to be down to San Diego in time for Steve and Kristin’s big day. Having known Steve personally for the better half of a decade, it is not a stretch to say that when the cameras are rolling, he doesn’t disappoint. And he couldn’t have picked a better wife in Kristin. Not only is she beautiful, but her personality is bursting at the seems and it made our job so easy! The two compliment each other in every way, not to mention their undying love for everything 80’s, which makes this Same Day Edit stand out.

When we were first handed the task of putting a SDE together to Bon Jovi, I must say I laughed and thought, “how are we going to do this one???” But, as I received their pictures and Davin got a feel for their style, we must admit that it came together almost naturally. So here it is, in it’s blog debut, Steve and Kristin. . . Wanted. . . Dead or Alive. . . Enjoy!

Also, a shout out to Paul Peterson from High Energy DJ for his efforts in keeping the reception rocking. For those who witnessed his performance in the middle of the dance floor, it was one that will not be soon forgotten. . .

Just thinking about this shoot makes me laugh. . . It all began with the idea to carpool over to the Fun Zone in Balboa (parking there not so friendly). In any case, all 3 of us pile into my car. Poor Lauren had to fit into the back of the Mustang with a light kit taking up two thirds of her seat. Then Cooper forgets his drumsticks. Then Cooper spills coffee on his shirt. Then Steve forgets the Sharpie to write on said drumsticks.

How we managed to get anything accomplished is beyond me. Fortunately Lauren was there to keep anything else from going wrong. . . . except if she only could have held the sun from setting for a few more minutes. . . LOL.

In any case, here is their Save the Date Video for the big day next year. We are setting up a custom webpage for Cooper and Lauren to display their acting debut (this video) and allow their friends and family to share in their excitement for the upcoming wedding. We are proud to now offer the Save the Date Video to any package as a very worthwhile add-on!

Well. . . We are very excited to announce that we have just been notified that we have won an Accolade award for our most recent demo that we put out there! What an honor. . . . and truly a great achievement as well. A very special thanks to Dave, Gabe, and Davin, for they shot much of the footage that went into the final cut for the demo and without them, Weddings by SML wouldn’t be where it is today.

Also, a very special thank you to all of our past clients who invited us to share in one of the most important days of their lives. Without the couples, we couldn’t exist.

To be rewarded for documenting emotional bliss is truly and honor and I can’t express my gratitude to all of our clients who put their trust into our lenses.

Here’s the letter we received! 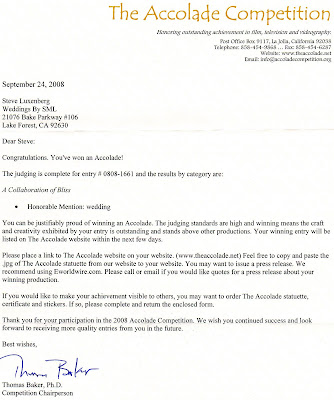 >Joseph and Sarah were married this past August at Temple Beth El in a traditional Jewish Ceremony. From the Tish, to the Bedeken, to the dancing of the Horah, this wedding was authentic in every way.

It is always so much fun to be a part of weddings like these because there are so many intricate and unique details that have been forged from thousands of years of tradition. Both families were so warm and friendly that it made shooting this wedding a very rewarding experience.

Oh!. . . . and before I forget, in case any of the guys from the Human Pyramid at the Tish see this, I was truly impressed. . . my compliments to your skills when put on the spot.

Here is the trailer from their special day, hope you enjoy!

>A picture perfect Labor Day Weekend in Long Beach was the site for Angie and Toke’s special day. As the color red played a major role in the event, so too did the atmosphere that was electric from beginning to end. Thank you for giving us the opportunity to share in your wedding day.

A special thank you to Joe Broccardo from Broccardo Photography for being a pleasure as always to work with. His images and professionalism speaks for itself. Here is the trailer for their wedding. Enjoy! 🙂